These days the word “selfie” might as well be added to the dictionary. After the introduction of the front-end camera on smartphones, taking pictures of oneself became an everyday action for 13 year olds and grandparents alike. We even have a hit song to go along with it. Yet still, there are times that we wish we could have a better photo, a more inclusive photo, less of a long-arm shot; times where we wish we didn’t have to stop the action to get the shot.

Thanks to Nixie, we may see this reality sooner than we thought. In an attempt to create the world’s first flyable and wrist-wearable camera, Stanford postdoctoral researcher Christoph Kohstall has conceptualized this futuristic drone that could add a whole new st of possibilities when it comes to taking selfies. The drone, which still has a bit of a bulky look to it, remains ready at all times as somewhat of a wrist accessory. When the user is ready to take a photo, they will theoretically be able to launch the drone into the air to do the work for them.

“You should be able, with a gesture, to tell the quadcopter to unfold. Then it’s going to take off from your wrist.” Kohstall explained. “It knows where you are, turns around, takes a picture of you, comes back, then you can catch it from the air and put it back on your wrist.” 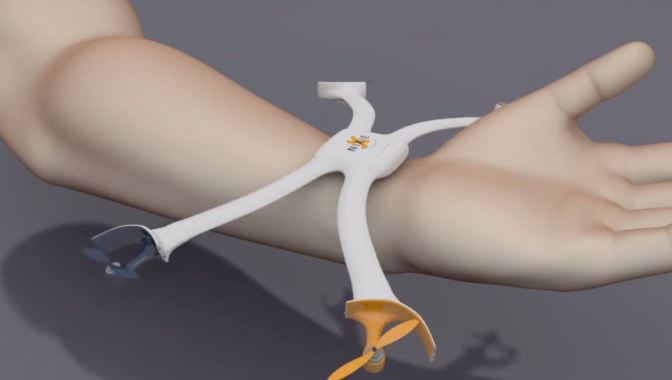 Kohstall, project manager Jelena Jovanovic, and team member Michael Niedermayr are working to perfect the drone, a concept that began with a wearable pair of glasses and eventually turned into the wrist piece that is currently being developed. Nixie is now a finalist in Intel’s Make it Wearable Challenge and according to the Creators Project, when finished, the drone promises to handle everything from selfies to panoramas to continuous movies, with preset modes for any on-the-go situation.

A Reality in the Making

Make It Wearable, a part-competition and part-entrepreneurial mentorship program that kicked off 9 months ago, challenged thousands of global participants to inspire the next big idea in wearable technology. The Nixie team is now one of 10 groups of entrepreneurs and developers which have been selected as finalists in the challenge and will move on to pursue the $500,000 grand prize, to be announced on November 3rd.

Though this wearable personal paparazzi quadcopter is still a concept in its infancy, by becoming a finalist in the Make It Wearable challenge the Nixie team has already secured $50,000 and all of the mentorship, design help, and technical support you can imagine from Intel. Essentially, we may actually be looking at a new photo-taking reality.

So if you’ve ever been in a beautiful place and tried taking a photo of yourself, only to miss the background, or if you’ve ever tried to snap a shot of yourself and a group of people, only to cut out half of someone’s face, or if you’re just really into futuristic wearable tech gadgets, keep an eye out for Nixie.

I'm a writer, editor, and avid adventurer who splits my time between the East Coast and Middle East. While I'm not writing (and often when I am), I love to travel. I believe that "yes" often leads to great adventures. View all posts by Leilani Rose